We have had an amazing time with the American Film Showcase (AFS) in Pakistan. These past 7 days have brought together the 60 Second International Film Festival (60siff), American Film Showcase in association with USC School of Cinematics, Hunerkada, and the US Embassy, who have all played very significant roles in the success of the events. Looking back at the journey of the AFS in Pakistan we’ve been through the round table discussions, the workshops, the curtain raiser of the 60 Second International Film Festival and the screening of the AFS chosen documentary “Side By Side” in the two major cities of Pakistan: Islamabad and Karachi.

The round table discussions were hosted at both Serena in Islamabad and at Avari in Karachi where noted filmmakers gathered together with Ted Braun and Marylin Agrelo to discuss the power of story-telling especially within documentaries. Following the round table discussions, Ted and Marylin proceeded to conducting Workshops on ‘the Art of Cinematic Storytelling’; at PNCA in Islamabad and at Szabist Karachi. The debate as to the success of a film was set aside with Ted asserting that nothing is as important as a good story. “One of the most important things that will be a product of this workshop is that you have great stories to tell, don’t worry about the tools, worry about the story and make sure it moves you. If you have one story to tell, what would it be?” said Ted Braun.

The two continued their journey at the curtain raiser of the 60siff and the screening of the documentary ‘Side by Side’ which again took place in both cities, in Islamabad at PNCA and  in Karachi at Southend Club, where we saw a great turnout and an even greater love of film. Appreciation for the initiative was seen in the eyes of many, even those of Syed Ali Raza Usama, director of the 2013 hit Pakistani film Mein Hun Shahid Afridi, who said “There needs to be more media education in this country, so that younger people would learn to figure out, firstly what are they trying to communicate and secondly, how to do that. Even if in just 60 seconds.”

Many enjoyed the 60 second films which also included an award ceremony and the winners from the festival were given certificates. This basically included Pakistani filmmakers with the best films from all categories with certificates awarded to Ahsen Ejaz, Zahid Gill, Nauman Rana, Uzma Firdous and Mujtaba Pervaiz amongst others.

At the end of the day we are pleased to have hosted such successful events that were enjoyed by many from the media sector and of course by the general public itself. As for Mr. Braun, he said “I was enthralled at experiencing the richness and diversity of this country. Its openness to engage itself with others is amazing, I wasn’t expecting that.” Marilyn Agrelo appreciated Pakistan’s diversity as well and said “There are so many different cultures here. I would love to see films on the tribal areas and mysterious things that the West doesn’t really know about. And I think the people who need to make them are Pakistanis.”

Ted and Marylin concluded their journey on a memorable note. Ted Braun, impressed by the enthusiasm of young emerging filmmakers stated that “One of the things that we’re looking forward to is engaging in discussion with emerging Pakistani film-makers on what social change might just mean to Pakistanis, because in addition to the political and social issues, films can engage people on social change on a very basic, human level.” 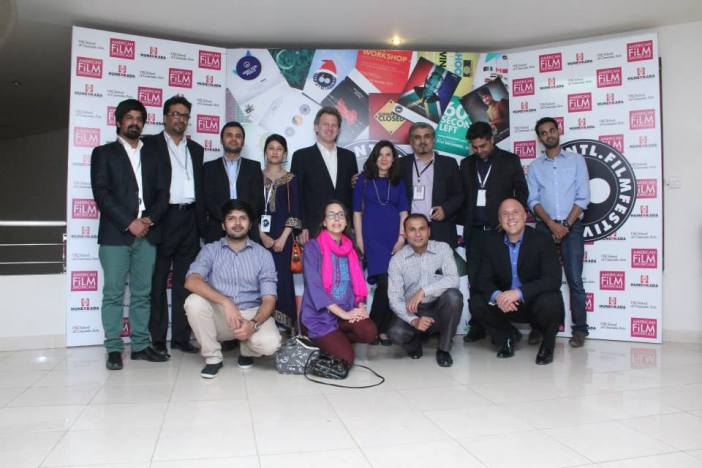 We were also glad to see the excitement of the press in covering our events. According to Dawn News ours was a “Festival with a Difference.”